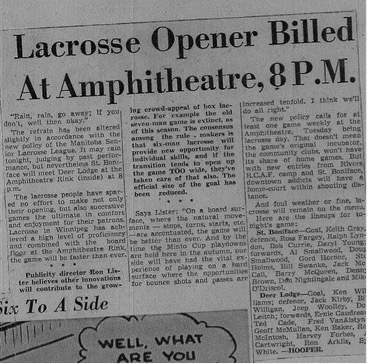 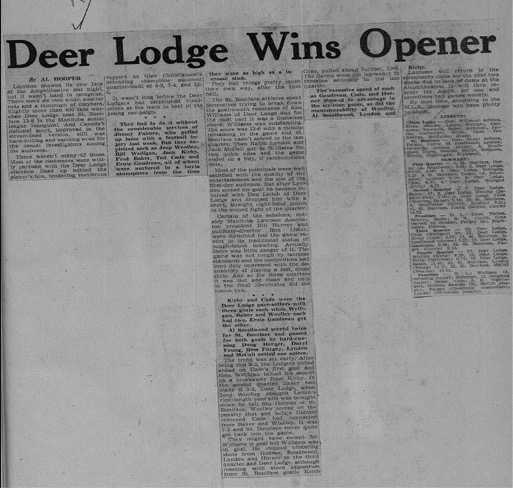 When you think of box lacrosse you think of the “Fastest game on two feet” – it was not always so. But with significant rule changes the game changed from congested game requiring brute force to a game of speed, strength, and finesse.

Modern day Box Lacrosse evolved from the violent Indigenous sport, “baggataway”, where hundreds of players competed on a field of over a mile in length. In the 1860’s the middle classes of Montreal and Toronto could not accept the wild violent style of play and adapted the game by standardizing the ball and the size of the stick, while reducing the number of players per team to twelve and the size of the field to two hundred yards. In 1869 William Beers, a lacrosse goalie, dentist, and philanthropist, wrote the first set of standardized rules aimed at reducing the violence of the game.

Between 1911 and 1924 the agrarian migration from Ontario and Quebec to the West spread the game across most of Canada. The spread of the game demanded a national set of rules so competition would be similar in all part of Canada. The standardization involved the number of players on the field, the length of the field (usually surrounded by a short fence) being reduced while the size of the goal and goal crease remained 6 foot square and 12 foot square respectively. As well the minimum length of penalties was maintained at 5 minutes. Face offs occurred after a goal, penalty call, or the ball going out of bounds. Also the rules around substitution were relaxed allowing players to come out and reenter the game. These standardized rules allowed for national competition.

In 1931 sport promoters introduced box lacrosse to attract crowds to their idle hockey arenas in the summer. While the professional’s leagues that played this new game inside hockey arenas failed, the introduction of the game of “boxla” changed the landscape of Canadian amateur lacrosse.

In 1932, the Canadian Lacrosse Association announced that the Mann Cup and Minto Cup championships would be compete under rules of box lacrosse- 7 players aside and played inside a hockey rink. “Boxla” was now a hybrid game- field lacrosse played in a hockey rink. The rules around substitution allowed players to enter the game freely during the play- similar to the changes allowed in hockey.

To speed up the game and minimize rough play, the CLA in 1954 removed the final vestiges of the field lacrosse by reducing the number of players from 7 to 6 and the size of the net from 4 ½ feet square to 4 feet square. One of the more controversial changes was to transforming face offs from a “free-for-all” to a process of quickly putting the ball into play by having the opposing players draw the ball straight back.

This controversy was highlighted in the 1954 Eastern Canadian Play downs for the Minto Cup between the Long Branch Monarchs, Ontario champions, and the Manitoba All-stars. In the first game of the series, using the new rule, the All-Stars upset the Monarchs 10-9 by dominating the face off circle and scoring opportunities. Responding to Ontario protests about the face off rule, the CLA determined the second game would be played under the pre-1954 face off rule. Using this to their advantage the Monarch defeated the All-Stars 12-10. In the third and deciding game the All-stars adapted to the face rules and defeated Long Branch 7-6, capturing the Eastern Canadian Championship, earning the right to compete with the Vancouver PNE Indians for the Minto Cup.

These rule adaptations made lacrosse the “fastest game on two feet”. With the addition of the 30-second clock in the 1960’s and a reduction of the reasons for face offs in 1980’s, box lacrosse moved closer to the high-speed game we enjoy today.