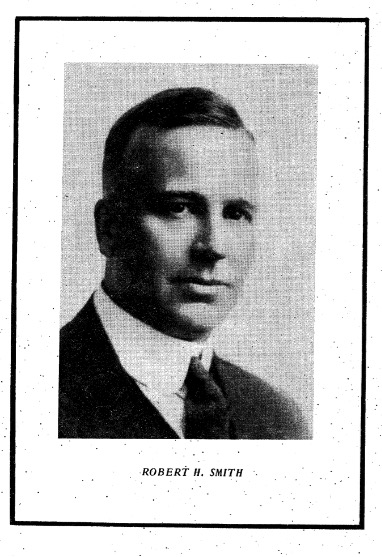 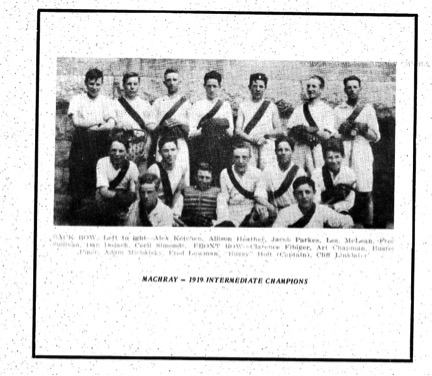 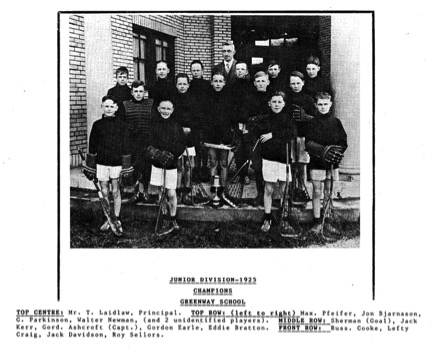 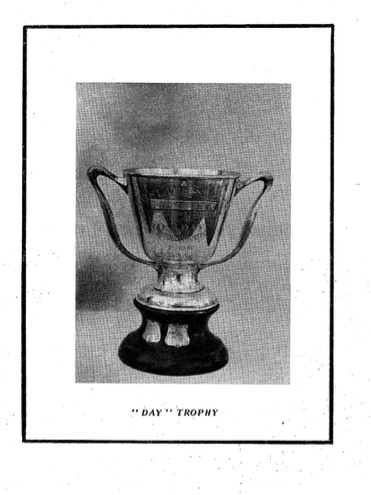 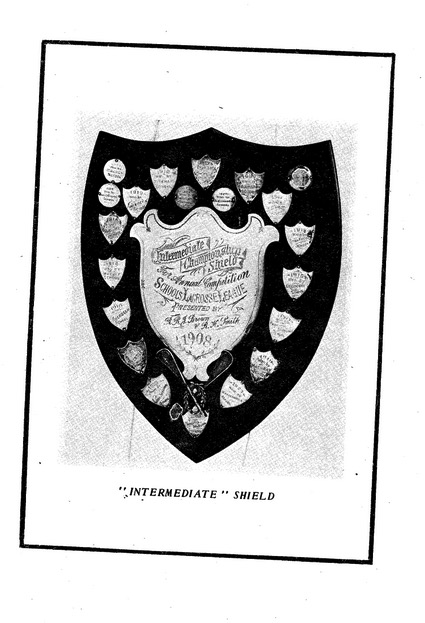 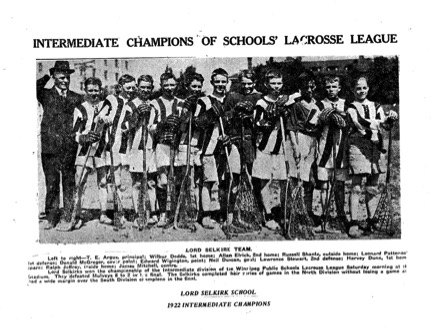 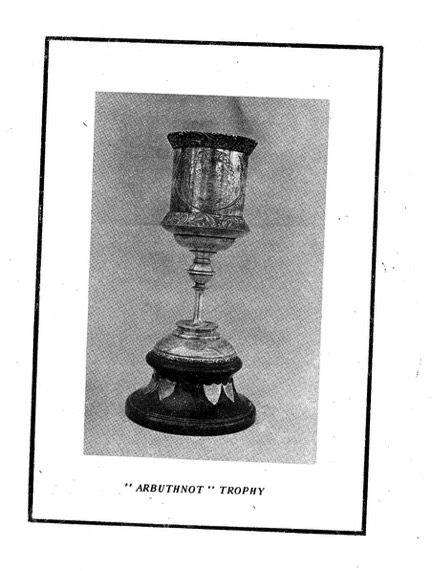 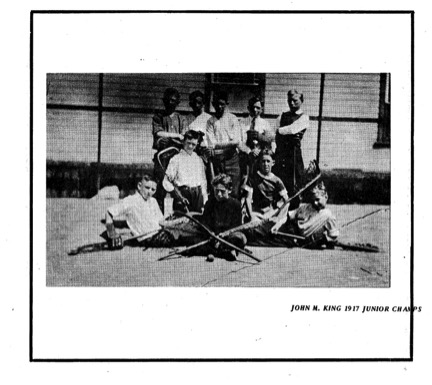 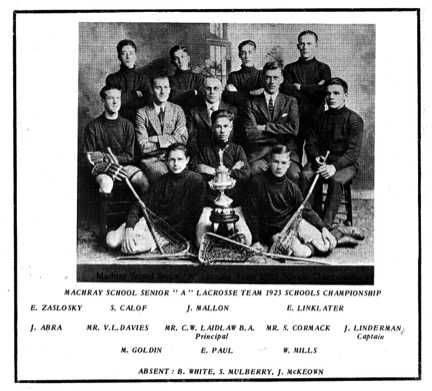 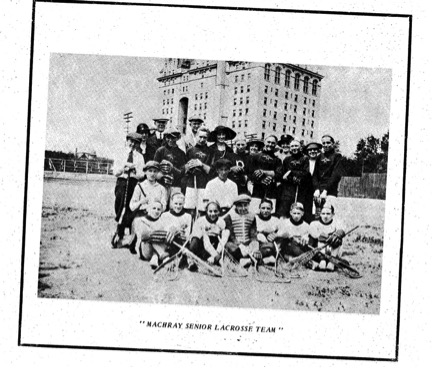 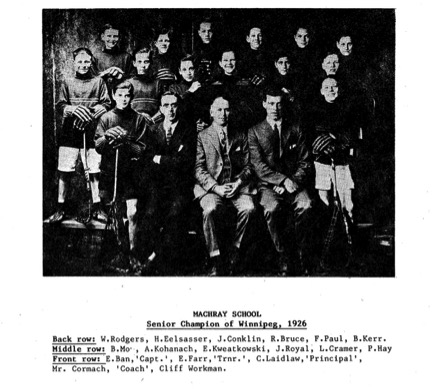 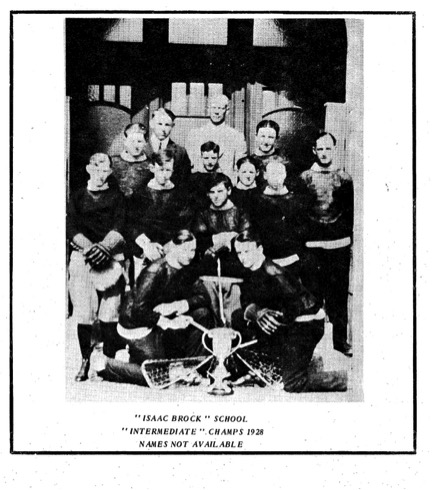 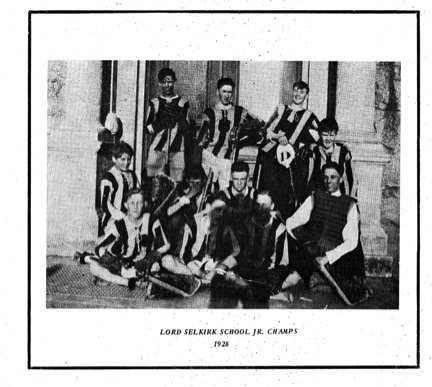 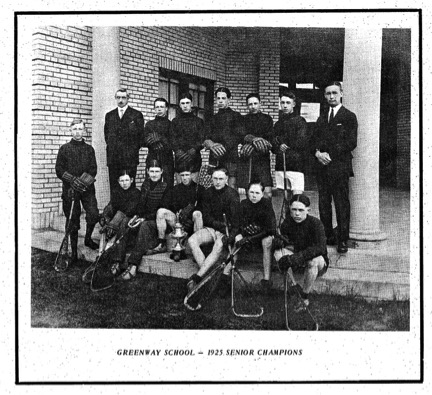 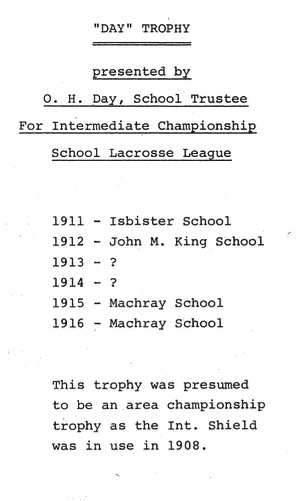 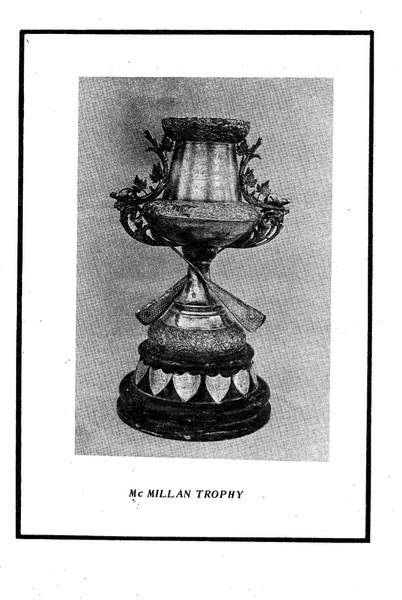 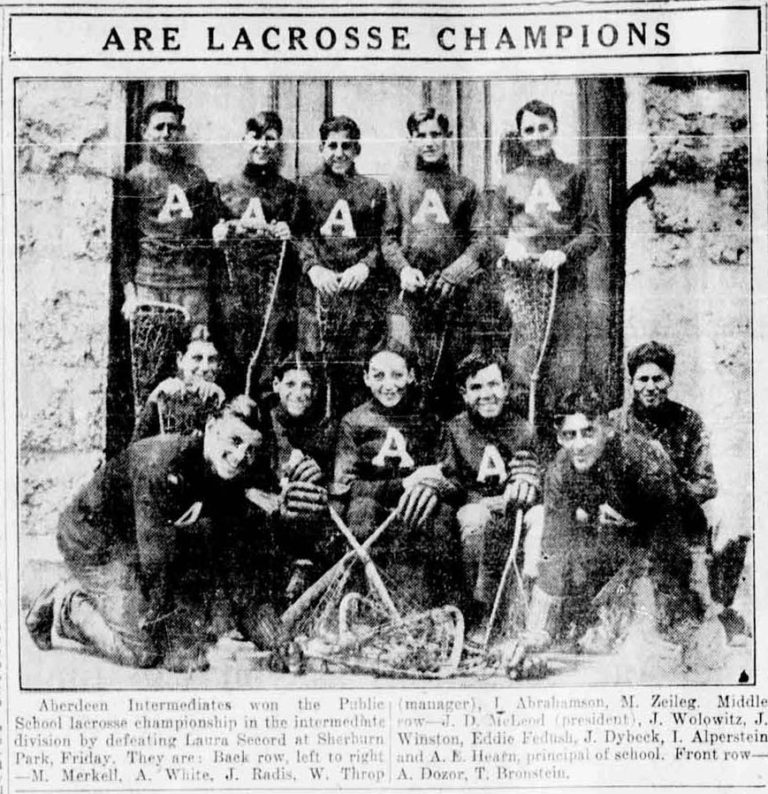 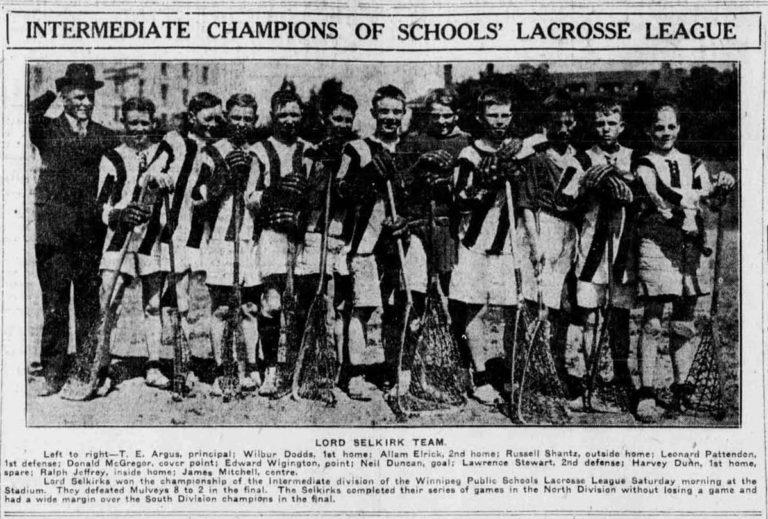 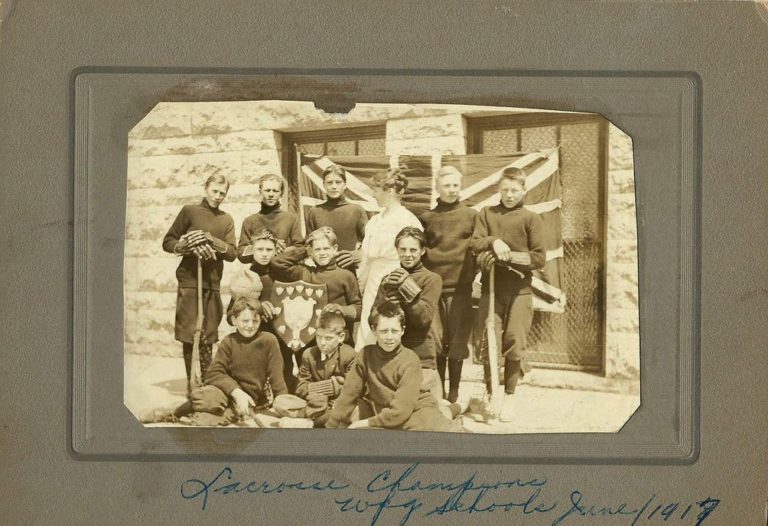 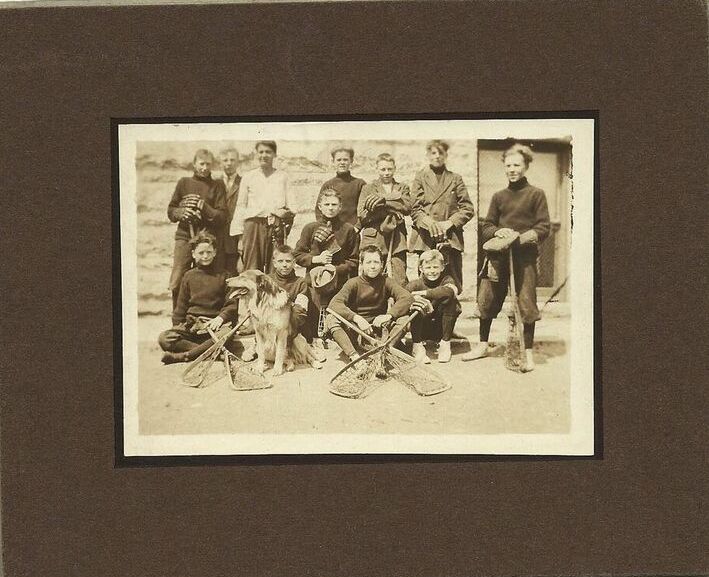 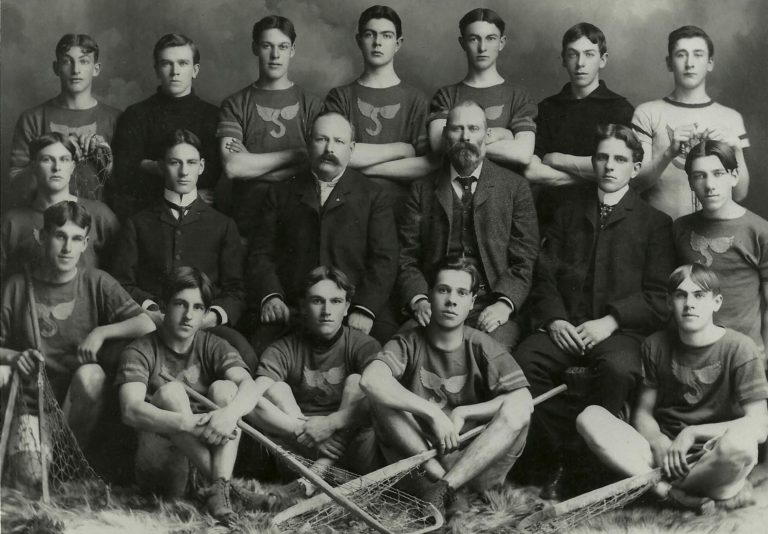 In Winnipeg, this passion for the game merged with the budding field of child psychology that believed that children could use play to learn and develop- physically, cognitively, emotionally, and morally. Play was seen as purposeful activity that could be used to develop physical traits of vitality and manliness and cognitive skills of decisiveness, and clear-headedness in children, while inculcating the values of hard work, loyalty, determination, cooperation, teamwork, charity, and fair play. It was generally believed that these skills and values would ultimately make them productive members of society.

This notion of developing character through sports found a receptive audience in the Winnipeg School Board which lead to an emphasis on physical activity in the school curriculum and the formation of the Winnipeg Public Schools Athletic Leagues- soccer, soft ball, speed skating, and of course lacrosse in 1901. Opportunities to play in these leagues were restricted to boys. It was believed that when well-played and kept under tight control by the referee, lacrosse was a spectacular field game that provided training in endurance, decision making, and self-control for boys of all ages. It is significant to note girls were restricted to gymnastic and folk dancing.

To encourage participation, the school board subsidized the cost of the sticks, and lacrosse quickly became the most popular summer sport in Winnipeg. Lacrosse evolved into a citywide springtime ritual with boys, a lacrosse stick slung over their shoulder, marching off on Saturday mornings to play lacrosse in one of the school-based leagues.

Robert H. Smith, a fine lacrosse player and secretary of the Winnipeg Lacrosse Club, spearheaded the formation and administration of the School Lacrosse League. Smith moved to Winnipeg from Goderich, Ontario with his family and started working for the Winnipeg School Board in January 1893 moving to the position of Secretary-Treasurer in 1907. For many years the Winnipeg leagues were noted for its well-conducted competition and quality of play.

Most practices took place during 15-minute recess periods and consisted of a teacher, designated by the principal, throwing a ball in to play. What ensued were a rush of players and a series of skirmishes to gain and maintain possession of the ball. The players learned to play the game of lacrosse by playing the game, with the teacher/ coach providing individual skill instruction to correct or modify skills performed during these scrimmages.

Games were played on Saturday mornings starting in the month of May, with almost all of the games taking place on school grounds. The league was run and organized by the principals and teachers of the district, with the latter often taking on the role of referee. Boys penalized on the field on Saturday would often be reprimanded for their misconduct at school the following Monday.

While the focus of the Winnipeg Public Schools Athletic Leagues remained the physical, cognitive, and moral development of young men, the lacrosse league provided a developmental opportunity for the city’s young lacrosse players. Upon completing their career in the school league, many skilled athletes went onto play for the Nationals, Shamrocks, Boilermakers, Fort Rouge, Tammany Tigers, Argonauts, and Wellingtons in the Manitoba Lacrosse Association Senior League. School league grads, Fred Allen, Charlie Benson, Hugh Benson, Cliff Crowley, Frank Hawkins, Walt McElheran, Dave Oliver, Jim smith, Bun Stephenson, Sam Thompson, and Elmer Wilson, formed the core of the 1932 Argonauts that competed for the Mann Cup against the Mimico Mountaineers. The two most prominent players who developed their skills the school leagues were Dick Buckingham and Frank Hawkins- both being selected to the 1932 Canadian Olympic team in Los Angeles.

Between 1885 and 1919, Winnipeg and lacrosse boomed. The population of Winnipeg went from less than 40,00 to over 150.000 people. This expanding population fell in love with the game of lacrosse. Joe Fahey, writer for the Winnipeg Tribune described this emotion: “Of all the sports that have gripped this town, none have gripped it like the great national game of lacrosse between 1885 and some years afterward”. Senior lacrosse games, played on Sunday night, between teams like the 90th Regiment and the Winnipeg Lacrosse Club would regularly attract crowds in the thousands to Dufferin Park. In 1904, a game between Olympic Gold Medalists, Winnipeg Shamrocks, and the team from Souris attracted over 10,000 to the Old Exhibition grounds. This enthusiasm for the game of lacrosse waned in the late 1920’s. A number of reasons for this loss of support have been put forth.

Some suggest rough play brought about the decline of lacrosse in Winnipeg and Manitoba. This sentiment was especially strong, as many educators and the public; in general, viewed the game as too violent.

The second cause that is closely related to the first reason was Winnipeg School Board pulling lacrosse from the Winnipeg Public Schools Athletic Leagues in 1929. Two specific official explanations cited for terminating the lacrosse league were that the game was too violent and too expensive. The Board felt that lacrosse that was intended to enhance moral development and behavior of young men was too physical, bordering on violent, and a game played this way had no place in the public school system. The expense of the game was directly related to price of lacrosse sticks. From the start of the league, the Board paid half the cost of the stick, but even at this reduced price more and more families could not bare the expense. The Board was stuck with a surplus of sticks and could no longer justify the expense. A third reason, not officially stated by the Board, was that retired older teachers and principals, who were involved in initiating the league, were not replaced with knowledgeable, skilled coaches and officials. When teams coached by these inexperienced coaches met teams of experienced coaches the games tended to be one sided. Frustrated by the score the team of the inexperienced coach may revert to physical play to even up the game. If these games were officiated by an inexperienced referee the games tended to get out of hand. These games reinforced the impression that lacrosse is too violent game.

The third cause for the decline of lacrosse and ultimately the end of the school league was a lack of articulation between the school league and the Manitoba Lacrosse Senior League. As noted early a number of players from the school loop were able to make the jump from school lacrosse to the senior circuit, but most were unable to make the leap. Without a consistently operated junior league, where high school players could refine their skills before entering the senior league, a significant number of players decided to play football, baseball, or any of the new emerging sports.

A fourth cause was a general decline of interest in the game of lacrosse. More and more of recreation was being provided by local clubs and these clubs chose not to offer lacrosse, focusing on hockey in the winter, baseball in the summer, and football in the fall.

At the turn of the 20th Century, lacrosse was king in Winnipeg with the school league being its crown jewel. The school league exposed large number of boys to the game of lacrosse while providing a well-organized system that allowed players to progress, as they got older. Playing for the school allowed players to play with their classmates, developing friendships that would last for a lifetime. The league also did a pretty good job developing players for the Manitoba Lacrosse Association. The end of the school league removed a proven pathway for the development of lacrosse players. The loss of this pathway forced a dramatic restructuring of the game in Winnipeg.