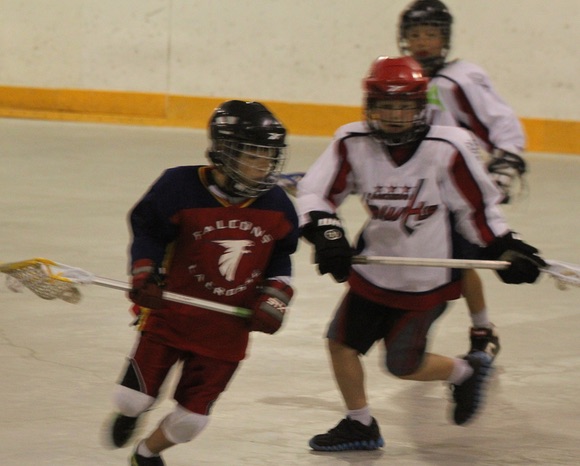 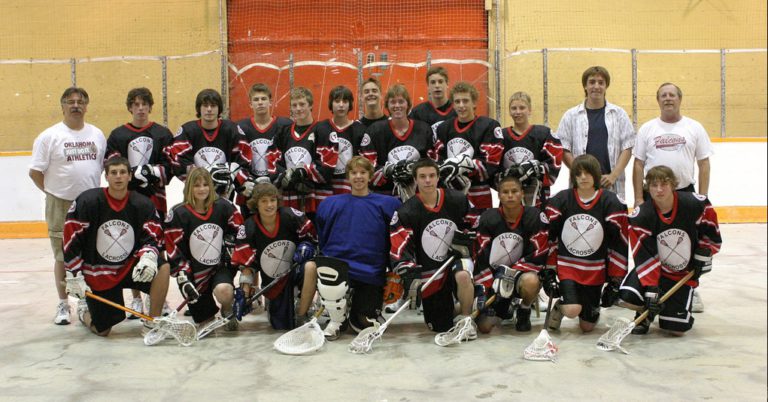 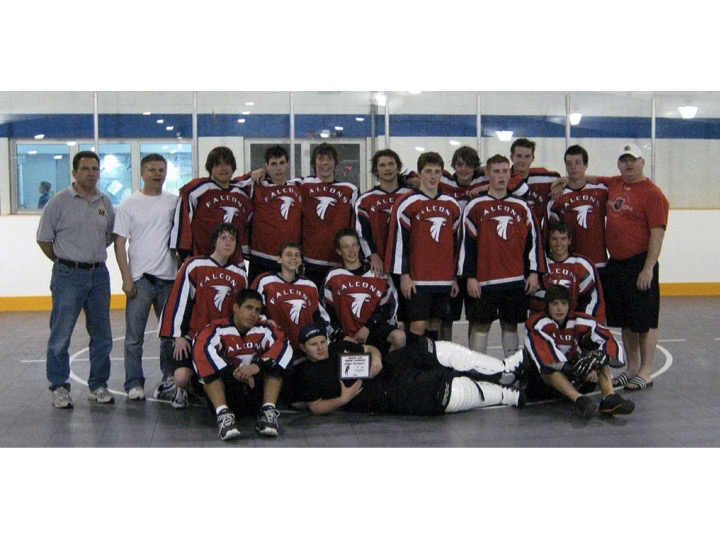 The North Winnipeg Falcons Lacrosse has its roots in the community centres of North Winnipeg and West Kildonan. In the mid ’80’s a passionate group of players and coaches decided to create a club that would represent pee wee and bantam age groups in the Tyndall Park area. After trying unsuccessfully to work out an agreement with a local community centre the group decided the club would be better off on its own. However, that meant it suddenly needed a name and more importantly it needed jerseys. They didn’t have much money, and neither did the players who wanted to join this new club. So they did what any true “North-Ender” would do. They sought out someone who would give them a deal. In no time at all, they found someone who knew a local businessman who could help. The man had a stockpile of L.A. Kings jerseys, but the Kings were changing their logo and the jersey’s weren’t selling. He gave the start-up squad a deal on the jerseys and their problem was solved. In 1985, Kings Lacrosse was born.

Teams would play under the Kings name for nearly 15 years, before changing officially to the Falcons in 2000. Winnipeg Minor Lacrosse was dividing the city into four zones, and the club that would represent the city’s northwest quadrant needed a name. Several names were considered, as organizers were determined to pay tribute to the early clubs and supporters who kept lacrosse alive in north Winnipeg. They considered the names from the community clubs that had sponsored teams over the years. Names like Norsemen, Warriors, Nor’Westers, and Chiefs, but it was the longtime support of the Canadian Polish Athletic Club or CPAC that won out. CPAC teams had been called Falcon’s and so that was the name that stuck.

Over the years, enrollment with the Kings or Falcons has had its ups and downs, but averages about 120 players a year through all age groups from tyke to senior. Year after year, the Falcons organization prides itself in making lacrosse available to anyone who wants to play, regardless of skill level or ability to pay. What you don’t know they’ll teach you and if you can’t pay they’ll find a way through sponsors or fundraising to help you. That commitment to the game has fostered an intense loyalty from the players who’ve played on Falcon teams over the years. While they now come from areas far outside the traditional “North-End” including (for a few years) the nearby communities of Selkirk, Stonewall, and Beasejour when a player puts on a Falcon jersey they can’t help but feel a little of that “North-End” pride.

Falcon teams have won many championships and tournaments over the years. Teams have represented the club and the city of Winnipeg at the Canada Day tournament in Edmonton and a tournament in Moose Jaw was a regular pilgrimage for Falcon teams. Officials from the area have succeeded too, handling games at the National and even World Championship level.

The core of the organization is its volunteers. It’s always risky to name a few while not naming all the people who have devoted countless hours to organizing teams, recruiting new players, and sharing their passion for lacrosse. However, the Falcons just wouldn’t be the same without Glen Henkewich, Gene Tymofichuk, Tim Isfjord and Norm Isfjord. They’ve had help, but under their leadership the Falcons have built a solid foundation for a brighter future.

And if anything demonstrates the core of what it means to be a Falcon, it is the second generation of young Falcons who are showing up at the rink these days. As well most teams are now being coached by Falcon alumni creating continuity between the past and the future of the organization.

In 2005, the Falcons celebrated 25 years of “North-End” lacrosse, whether it’s under the Kings or Falcons name, the future looks bright indeed. Young players, children of the Kings/Falcons pioneers are igniting their own passion for our “other national sport”.